Skip to content
WHY MACCABIAH IS MY FAVORITE DAY AT CAMP

WHY MACCABIAH IS MY FAVORITE DAY AT CAMP 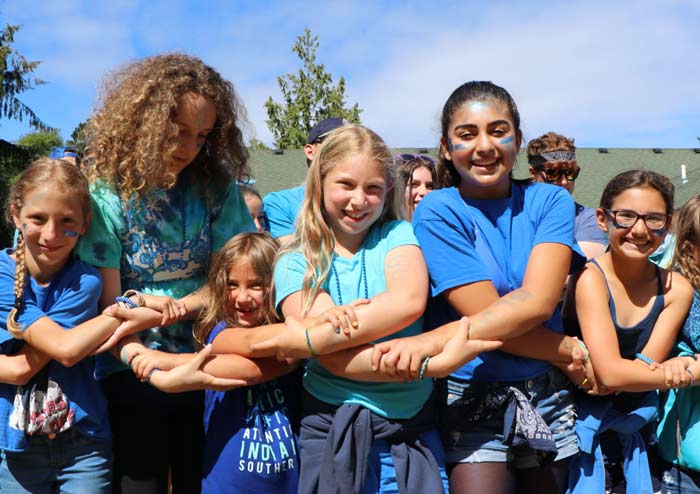 Maccabiah, or what some people call Color War, should be the nightmare of any Inclusion Coordinator. It is the one day during each session where campers are in new groups away from their typical counselors, everyone is on a new schedule and the general atmosphere is loud, energetic, and potentially overwhelming. All of these are a possible disaster for our campers who need structure or those with sensory processing challenges.

You may be surprised to hear, then, that Maccabiah has become my favorite day at camp. Despite all of the potential obstacles, a kind of magic falls over the entire community in which campers form new friendships, build each other up, and embrace new leadership opportunities.

One of the ways in which this “magic” manifests most clearly is in the work of our teen captains. The night before Maccabiah, our 9th grade Teen Villagers (TVs) are informed who will have the honor of being the captains for our four color teams. Their responsibilities include assigning jobs to their whole team, making sure everyone is included, creating team spirit, and – most importantly – mentoring our younger campers. Second session this summer, we had 30 TVS, many of whom had been dreaming about being captains since they first attended camp in 2nd or 3rd grade.  When there is so much excitement around being a captain, it can be really challenging for the campers who are not chosen for one of the eight spots.

This was the case for J – one of our TV inclusion campers. When the night came to announce the captains, J was not picked. He began to cry and throw around his body, bringing on the stares of his bunk mates. Once J was led out of the room to calm down, the other TVs on his team started talking about ways in which they could help J be a leader on their team, even without him being a captain. By the time J was ready to rejoin his group, his teammates were ready to welcome him and get his input on various chants and posters for the next day. In the morning, J was up at the front of his team, enthusiastically helping lead the cheers and teaching them to new campers. The TVs and J demonstrated one of our most deeply held beliefs: everyone at camp plays an integral part in shaping a welcoming, meaningful, and inclusive community.

Another one of our TV inclusion campers – Y – was instrumental in helping his youngest teammates feel like a part of the team. At Maccabiah, cabins are split into the four different colors, which can be intimidating for younger campers who only know a few people outside their cabin. Y had already spent most of the session playing soccer with some of the younger campers during our individuals time, which made him a natural fit for guiding them when Maccabiah came around. Y demonstrated our value of L’dor v’dor and passed down our camp traditions, while making sure that all of the younger campers had jobs that made them feel included and valued.

Before each Maccabiah, the teen leaders and I discuss how they can support our younger inclusion campers. Our goal is to offer all campers – regardless of ability – an experience that seamlessly meets their needs and helps them thrive. This year, our new sensory room was a great tool for campers who became overwhelmed. It was wonderful seeing our teens advocate for younger campers when they needed extra support, and guiding them when they needed a break.

The thing that sets Maccabiah apart from all other days at camp is how each team, composed of different grades and cabins, comes together to help each other become their best selves, strengthening our entire community. By integrating inclusivity as a natural part of the rhythm of the day, these campers model the kind of world we wish to create:  one in which every person is included, respected, and supported.

Shayna Sigman is entering her third summer as the Inclusion Coordinator at B’nai B’rith Camp in Portland, OR. She obtained her Masters of Social Work from Washington University in St. Louis and uses her previous work in student support services to support campers during the summer. Her favorite part of camp is seeing the inclusive community built by all members of the BB Camp family, from campers to staff to alumni.